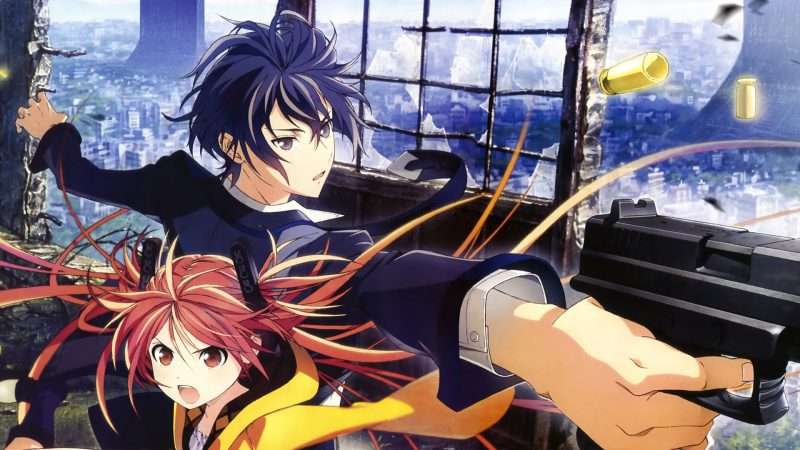 Black Bullet is the television anime adaptation of light novels. Also known as Burakku Buretto, the sci-fi action series was a hit with fans from the beginning. In fact, IMDb ranked the show a 7/10.

Two great animation teams Kinema Citrus and Orange Studio co-produced the show. They announced Season 1 of the anime at the Dengeki Bunko’s Autumn Festival in 2013. Masayuki Kojima directed the series, and Tatsuhiko Urahata came on as the scriptwriter. Chiho Umishima does the character design for the show. The season contained 13 episodes each with a running time of 24 minutes. Black Bullet aired between April and July of 2014 on Tokyo MX and Japan’s Sun TV. Crunchyroll acquired the license to broadcast the show outside Japan.

Former members of Production I.G and Bones founded Kinema Citrus in 2008. The Japanese animation studio is in Suginami, Tokyo.

Well-known for his use of CG animation, Elji Inomoto founded Orange in 2004. His studio is in Musashino, Tokyo, Japan. Inomoto began as a manga artist in Tokyo and began creating his own 3D illustrations.

Black Bullet is also the name of the show’s theme song. J-Pop duo fripSide performed the song in the anime.

fripSide started in 2002 with two members, Yoshino Nanjo and Satoshi Yaginuma. Though their name derived from flipping a record over, the name “Flipside” was already in use. They capitalize the S in fripSide because of Satoshi’s name.

Music producer and composer Shirou Sagisu composed most of the anime’s music. His music in Black Bullet is instrumental, but one composition was an a capella song. The words to “Aldebaran-Acapella” explain the plot of the story. Sagisu is best known for his choir compositions while a record producer.

The show rating is TVMA because of violence and blood. Fans caution viewers about the darkness of the series. They say the show reminds folks that life can be harsh and cruel. One thing fans disliked was that some characters seemed to have no limits. For example, Kagetane chatted on the phone while fighting. When his neck gets bent backward, he continues talking while snapping it back into place. Another character shoots three people without even seeing them.

On the positive side, the series includes twists and turns coupled with moments of humor. And, fans agree the art and production value was very good. Though the series ended with a cliffhanger, fans felt it wasn’t finished. This led to speculations about a second season.

Although some claim Season 2 releases in July of 2020, the producers have not announced it. Additionally, anime studios often waver over second episodes. The writer, Shiden Kanzaki, has been silent since the show concluded. His last tweet was March 2015 where he said he was “currently cooling”. He told fans of his weariness and claimed the work was overwhelming. Thus he has taken several respites over the years even though his health is fine. Fans say he was undoubtedly disappointed in the negative reactions the show received. For that reason, there may be no Season 2.

If there is a Season 2, the Cursed Children would fight the virus while trying to acclimate into society.  Could it be that the current world pandemic has held up Season 2? What irony that would be.

The setting takes place in an alternative Earth in the year 2021. As a horrifying virus sweeps the planet, those that catch it turn into eerie, deadly monsters. Gastrea, the parasitic virus, spreads through body fluids and alters a host’s DNA. As soon as the virus takes over 50% of the host, their DNA transforms. Now monsters, they continue through five stages. Each stage increases the monster’s strength and intelligence. As a result, their names change. For example, Stage IV monsters receive names of stars. Finally, when monsters reach Stage V they receive the name of a constellation. The monsters take on the name of Gastrea. Thus the war between Gastrea and the rest of society begins.

Survivors escape to Toyko city and surround themselves with Monolith Walls containing Varanium. After all, this metal can overpower the virus. Without this metal, humans would have all perished. If the Gastrea were within the walls, they would die an agonizing death. Because Gastrea heals without effort, society created Varanium bullets to prevent their healing. When pregnant survivors had the virus, traces of the virus showed up in newborn females. This gave these “Cursed Children” superpowers.  But remember that the Cursed Children have traces of the virus. Because of this, Varanium causes them some physical oppression.

A decade after the outbreak begins, those not transformed start Tendo Civil Security. Initiators, another name for the Cursed Children, pair up with adult Promoters. Basically, promoters lead the Initiators in their mission to regain civilization. Thus the pairs are called IP’s.

Be sure to read about

The main protagonist in the series is Rentaro Satomi. Kind-hearted Satomi was in high school when his parents died fighting the war. Because of this, the Tendo family adopted Satomi. When his friend, Kisara Tendo leaves the family, Satomi joins her. During the war, he protects Tendo from Gastrea and loses limbs and an eye from the attack. He survives because he receives Varanium replacements.  When Kisara Tendo starts Tendo Civil Security, Satomi becomes a Promoter. The Initiators like Satomi because he treats them well, unlike most humans. Later Satomi pairs with Enju Aihara, a Cursed Child, on a mission to save Tokyo.

No one knows that Enju is a Cursed Child until a Gastrea forces her to use her superpowers to save her friends. Like many underdogs, people underestimate her abilities because of her appearance. She fights along with Satomi in the war.

Kagetane Hiruko is a walking contradiction. He enjoys destroying the world, yet is a Promoter in the battle. He works with the Initiator Kohina, his daughter. Evidently, Civil Security expelled him from service at one point for extreme aggression. His destructive behavior threatens anyone who stands in his way, but in the end, he helps the cause.

Kisara is the president of the Tendo Civil Security. In her youth, Kisara’s brothers were mean to Satomi. When the Gastrea killed her parents, Kisara wanted revenge. She also believed that her family had something to do with their death. She ran away with Satomi and decided to fight Gastrea. Her exposure to the virus hurt her kidneys making her vulnerable. She pairs up with a Cursed Child, Tina Sprout.

Although the Blind Girl is a Cursed Child, her mother rejects her. The girl even put liquid metal into her eyes to persuade her mother to stay. Unfortunately, her mother left and now the Blind Girl must care for her young sister. So she goes about Tokyo begging for money as she sings trying to scrape together enough to survive. The only one that truly pities her is Satomi. This is a sad reflection on society. Her differences force her to live an ostracized life. She doesn’t even have a real name in the story. Everyone refers to her as they see her. The Blind Girl.

Obviously, the virus in the story is a disturbing reminder of the world’s current epidemic. But I’m grateful we don’t change into monsters. There are other similarities as well.

Gastrea, like our current epidemic, spreads through body fluids. In the story, humans fear becoming contaminated with the virus. Thus monsters that govern, change, or kill humans represent our current fears.  The story places humans between protective walls to keep the virus at bay. Similarly, we wear masks and practice social distancing. We work toward a vaccine, while the story develops teams for combat. With any virus, there will be those who are better equipped to survive. In the story, it is the Cursed Children. In current times, it is the young and healthy.

The story also parallels America’s experience in Vietnam. At the time, it was the longest war we’d faced. Although our soldiers were there to protect and serve us, we abandoned them. Americans couldn’t accept the loss of the war and the soldiers were a constant reminder. Likewise, the Cursed Children had a small dose of the virus inside them. Humans were afraid these children could cause another outbreak. Also, the Children’s connection to the virus that wiped out much of the human race was disconcerting. They were society’s best hope, yet people would not accept them. To acknowledge the soldiers or Children, society must acknowledge their enemy’s victory. Thus the soldiers or Children were unfairly punished.

The plot also depicts a prejudice toward people who are different. The humans don’t treat the Cursed Children like they do others more like themselves. Society seems intent on ignoring and mistreating them.

Some characters are quick to deceive people for their own gain. They’re even willing to start another war to keep society dependent upon them. Their self-worth is more important than the lives of others.

Yuki Kaji is a Japanese voice actor and singer with VIMS. He was the voice of Rentaro Satomi. In the 3rd Seiyu Awards, he won the Best Rookie Actor Award in 2009. Subsequently, he won the 7th and 8th Seiyu Awards as Best Voice Actor. Since then, he hosted Yuki Kaji’s Monologue and a variety show, “Kaji 100!: The 100 Things Yuki Kaji Wants To Do.”

Rina Hidaka is a young Japanese actress and voice actress with Office Asawa. Hidaka was the voice of Enju Aihara.

Rikiya Koyama is a Japanese actor/voice actor belonging to Haiyuzu Theatre Company. The actor, known for voicing villains, often goes by “Rikki” and “Raki-chan”. He was the voice of Kagetane Hiruko, the main antagonist.

Yui Horie is a Japanese voice actress and singer with VIMS and Starchild. Her fans nicknamed her “Hocchan”. She has been in over 350 productions and won Best Supporting Voice Actress in the 4th Seiyu Awards. Horie was the voice of Kisara Tendo.

Ai Kayano is a Japanese voice actress with Office Osawa. She was the voice of the Blind Girl.

There is no doubt that the series has a very interesting story. In a word, I say “kudos” to the writer for intriguing us thus far. The rich backstory and world-building would be a lot to undertake for any author. Let’s hope to hear more about Black Bullet in the future.