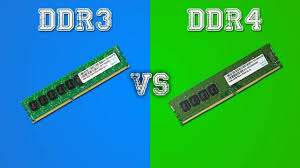 In order to make an intelligent comparison between DDR3 RAM vs DDR4 RAM, we need to first understand these terms. DDR is an acronym for Double Data Rate, an advanced version for Synchronous Dynamic random access memory. It is a class of memory integrated circuits used in computers.  Its release date traces back to 1998 but the latest update was released in 2014.

DDR3 vs DD4: Digging into specifications

DDR3 was released in 2007 and just seven years later DD4 was released. One big difference between DDR3 vs DDR4 is speed. You get no points to guess who has better speed, it’s DDR4. DDR3 specifications begin at 800 Millions of transfers per second and are as high as 2133 while for DDR4 it starts at 2133 MHz. This means that the clock speed is increased and hence the performance. It’s evident that DDR4 is more efficient than its predecessor.

You get high speed and efficiency but not without a cost! High speed comes with increased bandwidth and that, unfortunately, means more latency. However, with increased clock speed, DDR4 makes quicker transfers and matches its overall latency with DDR3. So that technically doesn’t count as a disadvantage over DDR3 and earlier versions.

DDR3 vs DDR4 has another major distin1ct feature and that is the voltage on which they operate. DDR4 operates at 1.2 Volts which is much lower than that of DDR3. This also accounts for a saving of 15W, not a lot for a home user but still, something is better than nothing!

Cost also varies when it comes to DDR3 vs DDR4. The successor costs more than its predecessors and that plays a crucial role for a customer while he’s making a choice.

DDR3 comes with a maximum memory of 16 GB while DDR4 has no memory limit! This unlimited memory can be a major feature for many users, businesses and organisations.

It’s cliche but it’s true! The final winner of DDR3 vs DDR4 depends on you and your specific expectations from the system. What looks good on paper might not be the best choice for you and also the other way round. Each new version comes with its own enhanced features and advancements. These may prove to be useful for you but sometimes they can be unnecessary embellishments for which you have to pay extra! Also, while you explore and enjoy DDR4, DDR5 is all set to be released 😉