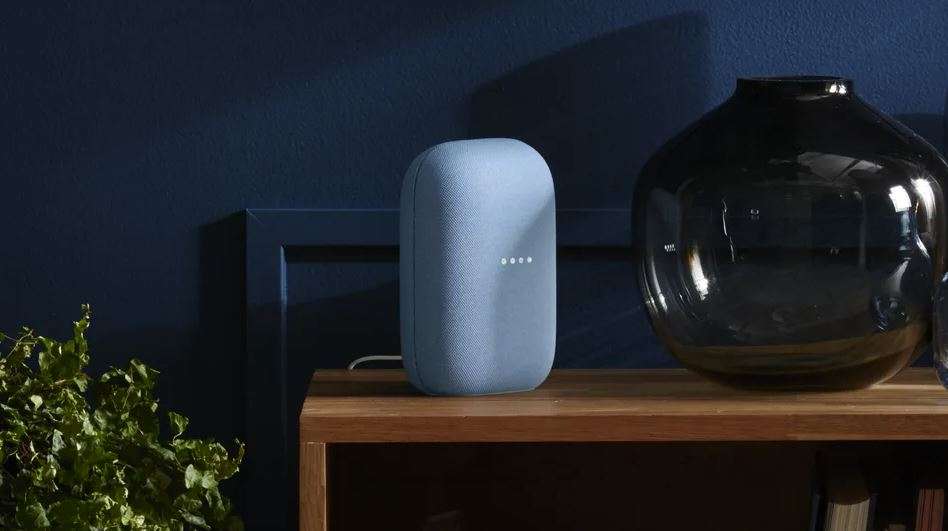 Nest Smart Speaker here’s our first official look at Google’s brand-new Nest smart speaker. As first spotted by Android Police, leaked pictures of the unit show it’s about 22cm (8.66in) tall and the fabric cover extends around most of its area.

Nest Smart Speaker it’s slimmer than the Google Home Max, and the form circumstance is, let’s say, in portrait preferably than landscape.

After reached out to Google, we implemented the above promotional image of the unit and the following video showing it used in a home environment. Or to be more precise, showing two of the units placed on a shelf behind a couch; as well as moved around the home, emphasizing portability.

This suggests the speaker designed to used in multiples linked around the home. Similar to (and thus a direct opponent too) Sonos systems, as well as being extremely highly portable. The hint at beefed-up speaker specs also tips it as a successor to the agreeably beefy Home Max.

The sky blue colour is the only one shown in the official assets, but the leaked images show a light grey unit.

While there were no additional details provided. Google was probably originally expecting to reveal the unit at their annual I/O conference, which was cancelled back in March 2020 due to the coronavirus pandemic. They’re likely now releasing the full announcement for the next Google Pixel merchandise event, currently (if tentatively, given the state of things) tipped for October.

Google will seem to take on the Amazon Echo series, and this new Google Nest device seems to specifically compete with the recently launched Amazon Echo (3rd Gen). The new device will possibly launch later this year; although there’s no official announcement on when the launch is for the time being. Since Google is marketing the Nest Mini and Nest Hub in India. The new Nest speaker will likewise launch in the country.