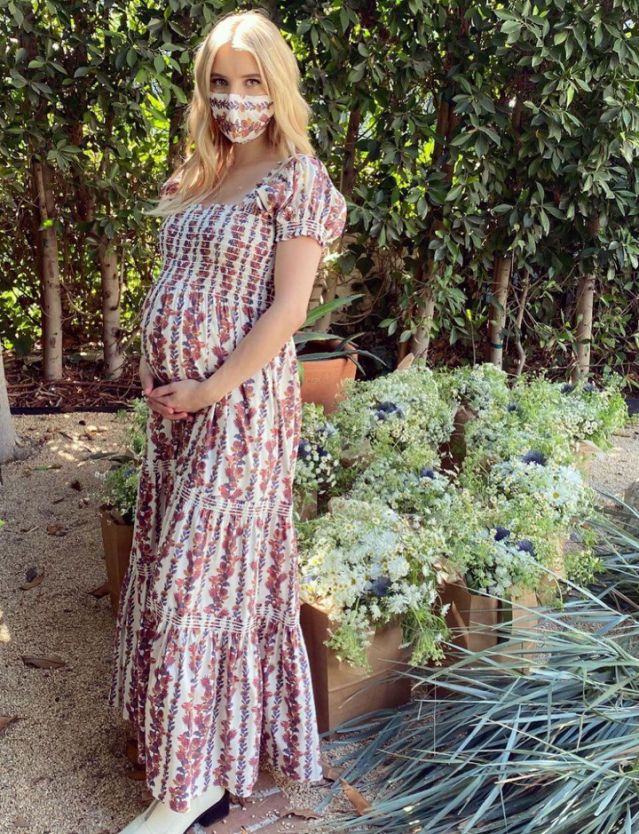 Emma Roberts; the actress, popularly known for her role in the American Horror Story; shared on her social media network, pictures of her socially distanced baby shower.

The baby shower was held on Sunday, October 4.

The rumors about the two expecting a baby started back in the month of June.

However, Emma Roberts confirmed the news only in late August. She shared pictures of herself embracing her belly; followed by revealing to her friends and fans that she was expecting a baby boy.

Emma Roberts; for welcoming her baby boy she curled up her baby bump in a printed dress. Furthermore, she also matched her outfit with a matching mask for the occasion.

Moreover, Roberts and her boyfriend, Garrett Hedlund; are very excited and thrilled to welcome this new chapter of their lives together.

A spokesperson close to the couple in an official statement said that; Emma Roberts’ baby shower was a garden party and everybody was instructed to separate themselves socially.

She was very enthusiastic. Her outfit showed off her tiny baby bump. Also, for their baby boy, she got several wrapped presents.

Roberts and Garrett also arranged for iced green cookies; and more nature-inspired treats with “Baby Boy” inscribed on them; for the baby shower.

A close friend of Garrett’s further added that that Garrett was quite thrilled and can’t wait any longer for the birth of his baby boy.

“He likes to look forward to something so incredibly exciting that they have shared. Emma’s doing all right. She has the nursery ready. She enjoyed sharing her baby shower with relatives. For all the support, she and Garrett are both really grateful.”

The couple has been together, on and off, ever since 2019. However, how did the two meet still remains a mystery to many.