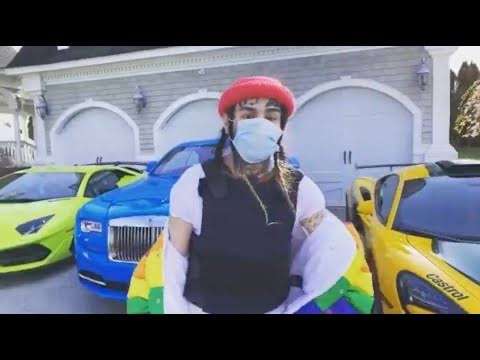 Tekashi 6ix9ine Shows Off His insane car Collection and his luxury lifestyle.

Tekashi 6ix9ine (six Nine) Best known for his Rapping style which is aggressive has rather Luxurious lifestyle. When we talk about Rapper we tend to think expensive Jewellery, and lifestyle we all wish to have. But Tekashi 6ix9ine, 24 doesn’t Really have stable Music career. With Public Feuds, legal issues to Years of Imprisonment. So let’s find out how luxurious Tekashi 6ix9ine’s life is and controversy related to him. First Let’s have a look on his insane car collection.

so, According to TMZ Tekashi owns Aventador, a McLaren, Rolls-Royce, Mercedes Benz G-Wagon, and a Range Rover. Tekashi 6ix9ine Shows Off his car collection in one of his video back in 2020, captioned it, that rapper who needs to rent a car, can DM him revealing he is Working on an album. After returning from prison he said to be buying cars, and jewellery Nonstop.

But that’s not all, there is more than luxury cars in his lavish lifestyle.

Also Read: Meek Mill and Tekashi 6ix9ine scream at each other during incident in Atlanta

so, while looking at this lifestyle you might be Wondering, how much this 24 years old earn to own this luxury. It is to be noted that he is still in House arrest. So, after he released from prison it is reported that he got several million dollars Deal. He obviously work hard for thus money but Tekashi 6ix9ine Shows Off  his luxurious lifestyle, threats his privacy. It is to be noted that he had to change his residential address several times for safety purposes.

What do you think, about his Rappers lavish and extraordinary lifestyles? Do tell us in comments.

Last month Tekashi 6ix9ine released Album called ZaZa which has already surpassed millions of views. At least now we know he is making millions to spend on his extravagant life.