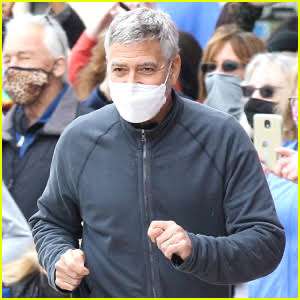 George Clooney is known for interacting with fans on movie sets. But this time he is on director’s chair,  Ben Affleck is the lead in his upcoming movie.

George Clooney thanked Fans, for letting them intrude their town. They are filming for movie “The Tender Bar.” Clooney Revealed that he is staying in the town with his Family. Fans gathered around movie set to get a glimpse of Clooney and Ben Affleck, Affleck is a Massachusetts Native.

Let’s find out more about their Upcoming movie.

The Tender bar depicts the story of J.R grew up with his uncle Charlie who is Bartender. He consider Charlie as a Father figure as he doesn’t have Father growing up. Charlie is a smart and hard working man having eccentric personality. As per Deadline’s Report.

Boston is the Location of filming, even Ben Affleck spotted several times in the city. One of the filming locations also includes Harvard’s Campus. Affleck was captured filming Graduation sequence on the campus.

The Tender Bar is the autobiography of an author JR Moehringer, adapted from his 2005 account. He is an award winning author.

As George Clooney is directing this movie, he is travelling quite a lot in America along with his Family. Filming is Said to be completed This April. It got rescheduled, due to COVID Restrictions. But now that everything seems to slowly coming back to track shooting will also wrap up within couple of Months.