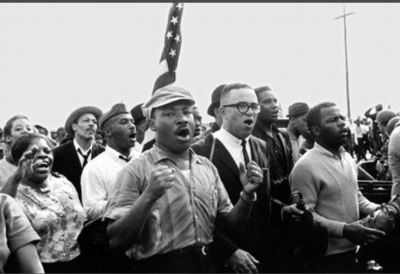 American Congressman John Lewis died Friday, July 17, 2020, of pancreatic cancer. Lewis embarked on a lifelong journey that would change the course of history. He is celebrated for his civil rights and political leadership.

“I believe race is too heavy a burden to carry into the 21st century. It’s time to lay it down. We all came here on different ships, but now we’re all in the same boat.” John Lewis

Lewis, born in 1940 to Alabama sharecroppers, grew up under the Jim Crow laws. These laws imposed racial segregation in the South as early as 1877.

When John Lewis was young, his mother often told him to stay out of trouble. Thus, his response to her resembles a phrase he later coined for American young people. “Get in trouble: good trouble, necessary trouble.”  He demonstrated those words by actively fighting for people’s basic civil rights, even to the point of physical peril.

At eighteen, John Lewis penned a letter to Dr. Martin Luther King, Jr. In response, Dr. King sent Lewis a bus ticket so they could meet. Stirred by Rosa Parks and Martin Luther King Jr., Lewis joined the civil rights movement. He also chose to attend the American Baptist Theological Institute in Nashville where he could study nonviolent protest. As a result, Lewis and his fellow-students gathered in public places to instigate sit-ins. Although they suffered violence during these peaceful sit-ins, they tolerated it for the cause. Lewis, along with almost a hundred others, was arrested during one of these protests. But that was only the beginning. During his civil rights days, he was arrested over forty times.

59 years ago today I was released from Parchman Farm Penitentiary after being arrested in Jackson, MS for using a so-called “white” restroom during the Freedom Rides of 1961. pic.twitter.com/OUfgeaNDOm

In 2013, Lewis told the Tennessean, “Nashville prepared me. If it hadn’t been for Nashville, I would not be the person I am now. We grew up sitting down or sitting in. And we grew up very fast.”

Lewis became one of the original thirteen Freedom Riders in 1961. The activists, consisting of seven blacks and six whites, rode buses through the South, challenging the segregation of public transportation. Although in 1957 the Supreme Court had ruled that segregation on public transport was illegal, arrests and beatings ensued.

To give blacks more voice, John Lewis became the Chair of the Student Nonviolent Coordinating Committee (SNCC) in 1963. That year, Lewis helped plan the March on Washington and spoke about jobs and freedom.

The Civil Rights Act became law in 1964. Nevertheless, the Act did nothing to make voting easier in the South. Consequently, in 1965 Lewis and Hosea Williams co-led a march from Selma to Montgomery, Alabama. When the March crossed the Edmund Pettus Bridge in Selma, state troopers attacked the demonstrators. This time, Lewis suffered a fractured skull. It is no wonder that the event became known as “Bloody Sunday.”

In 2004, at the foot of the Edmund Pettus Bridge, a monument in honor of John Lewis was unveiled in Selma, Alabama, to commemorate that day.

55 years ago today, we were beaten, tear gassed, and trampled by horses. I thought I saw death. I thought I was going to die. I don’t know how I made it back, but I know we cannot rest. We cannot become weary. We must keep pushing and pulling and find a way to get in the way. pic.twitter.com/gg6n1CyJls

Because the attacks were vicious, the images that circulated the country did not go unnoticed. Within a week, Lewis detailed the attack during a Federal hearing.

Only six months after “Bloody Sunday,” President L.B. Johnson signed the Voting Rights Act into law. Lewis kept the pen used by the President. In 1970, Lewis became director of the Voter Education Project and helped register millions of minority voters.

In 1986, Lewis was elected to Georgia’s 5th Congressional District and continued in Congress until he died. Upon his death, Representative Terri Sewell, D-Alabama called Lewis the “conscience of Congress.”

A big moment for Lewis came when Barack Obama won the presidency in 2008. Lewis said, “When we were organizing voter-registration drives, going on the Freedom Rides, sitting in, coming here to Washington for the first time, getting arrested, going to jail, being beaten, I never thought — I never dreamed — of the possibility that an African American would one day be elected president of the United States.”

Then on an emotional day in 2011, President Obama honored Lewis with the Presidential Medal of Freedom. Although that was a great honor, it was a small token for a man who had spent his life working hard for the freedom of mankind.

To reach out to the next generation, John Lewis created explicit novels about his work in the civil rights movement. In 2016, he won the National Book Award for the third segment in the series March: Book Three.

When he accepted the award along with co-writer Andrew Aydin and illustrator Nate Powell, it deeply affected him. “Some of you know I grew up in rural Alabama, very poor, very few books in our home,” Lewis said. “I remember in 1956, when I was 16 years old, going to the public library to get library cards, and we were told the library was for whites only and not for coloreds. And to come here and receive this honor, it’s too much.”

Barack Obama wrote a tribute on July 18 concerning his friend’s passing. He opened by stating, “America is a constant work in progress. What gives each new generation purpose is to take up the unfinished work of the last and carry it further — to speak out for what’s right, to challenge an unjust status quo, and to imagine a better world.”

JOHN LEWIS AND HIS LATER YEARS

Following a mass shooting in Orlando, Florida on June 12, 2016, John Lewis again led a sit-in. This time the sit-in took place on the floor of the House of Representatives. Lewis was intent on influencing Congress to take legislative action on gun violence. He said, “We have been too quiet for too long. There comes a time when you have to say something. You have to make a little noise. You have to move your feet. This is the time.”

In one of his last public appearances, he posed during the Black Lives Matter protest. He said, “They’re going to help redeem the soul of America, and save our country, and maybe even save the planet.”

2 thoughts on “John Lewis: His Legacy, Our Heritage”