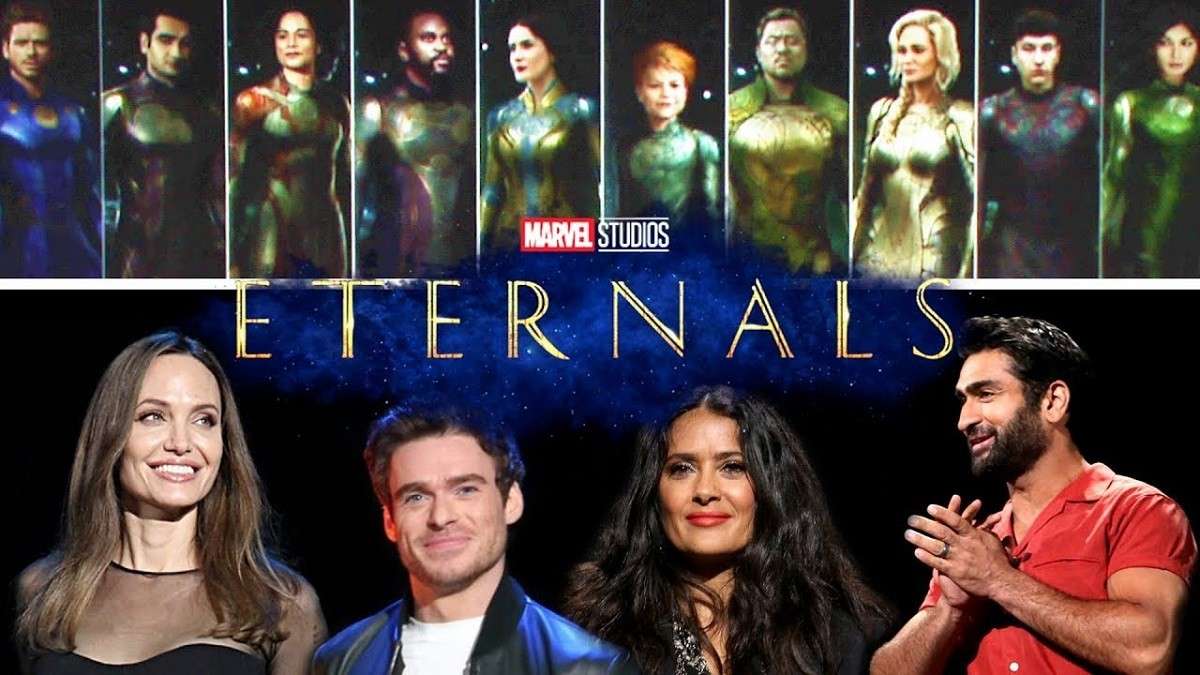 The Eternals will be the new work of marvel productions after The endgame. It is a movie which will be introducing a new pantheon of powerful heroes and villains . The eternals already has some high profile actors attached to it which includes Angelina Jolie and a new cast member Kumail Nanjiani who has completely transformed himself for his role in the movie.

The eternals basically is based on a world created by comics legend Jack Kirby in 1976. Eternals themselves are a species of powerful immortal beings created by the celestials. It is the twentieth film in the marvel cinematic universe and the second film of phase four.

The above mentioned characters are The eternals.

The upcoming film The eternals is directed by Chloe Zhao introducing audiences to a whole new corner of the Marvel cinematic universe by centering on a race of super powered immortal aliens , known as The eternals. These god – like beings have lived on earth for thousands of years, all this time keeping their presence a secret from humans . The movie which will take place after Avengers: Endgame, will see The eternals , creators, the celestials , send the team on a mission to defeat the Deviants, who are said to be mankind’s oldest enemies.

Kumail Nanjiani who is a new celebrity in the cast is an aspiring actor and a comedian. He takes his work very passionately. He started his career in acting by working in television shows like Portlandia , Veep, Franklin and bash. After seeing his work, he was given his own show on comedy Central channel.

In 2017, nanjiani wanted to try to make his own big career in acting so he written and directed his own movie The Big Sick, it was later on nominated for Academy award for Best orginal screenplay.

Later on, he was offered a prime role in upcoming marvel – The Eternals. His opposite stars were Angelina Jolie and Salma Hayek.

I never thought I’d be one of those people who would post a thirsty shirtless, but I’ve worked way too hard for way too long so here we are. You either die a hero, or you live long enough to see yourself become the villain. I found out a year ago I was going to be in Marvel’s Eternals and decided I wanted to transform how I looked. I would not have been able to do this if I didn’t have a full year with the best trainers and nutritionists paid for by the biggest studio in the world. I’m glad I look like this, but I also understand why I never did before. It would have been impossible without these resources and time. So big thanks to @grantrobertsfit who started working with me at the beginning of the year and made me understand true physical pain for months and months. Then, once we started shooting, a massive thanks to @davidhigginslondon and his team (@ellispartridge, @thebeardypt, @tomcheesemanfitness) for training me almost every day and making me strong, limber and injury free. I can almost touch my toes now. (And thank you for forcing me to do cheat meals David.) Matthews Street Catering for their delicious and healthy meals. And finally, the biggest thanks goes to @emilyvgordon for putting up with me complaining and talking about only working out and dieting for the last year. I promise I’ll be interesting again some day. #thirstyshirtless (Photo by @markupson.) (edit: I left off one very important person: @lancecallahan who trained me for 6 years and helped me build the foundation I could use to do this. Thank you!)

We could say he was a dedicated and passionate actor because of his incredible transformation. He transformed his physique so he could fit in perfectly. He went on a strict diet and extensive gym hours.

Anglina jolie is one of the best actresses we’ve ever come across. Everyone knows who’s Anjelina jolie. As her upcoming movie- The Eternals. Many people don’t know about The Eternals, it’s a very old comic series. Not many people would remember it or would have seen it. Now the directors are making a movie on it.