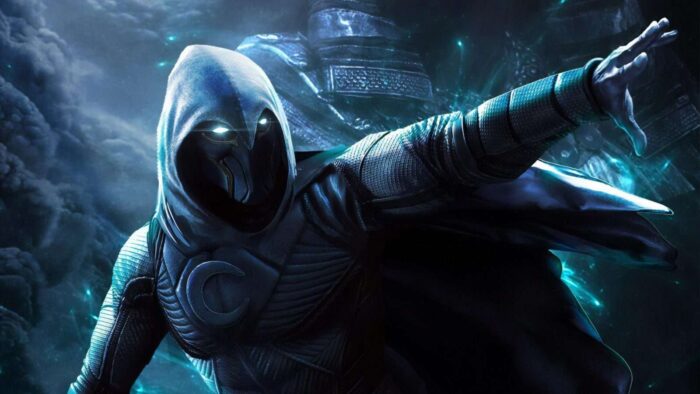 Who is Marvel’s, Moon Knight? You don’t know Moon Knight! Well get your finest white suit, and let’s dive into one of Marvel’s most unpredictable heroes to moon over.  A mercenary turned caped vigilante, Marc Spector was enlisted by the Egyptian god Khonshu to deliver the god’s vengeance.  In addition to these external struggles, he also internally battles with mental issues.

Back to Moon Knight’s origins. Jewish born Marc Spector was a mercenary with years of military experience who began running dastardly jobs with a terrifying merc,  Bushman up in Egypt.

Spector eventually turned on the murderous madman after Bushman attempted to kill two innocent archaeologists, Marlene Alraune and her father. Marlene survived, but her father did not, and Spector was left for dead in the scorching desert heat.

Spector made his way to an Egyptian tomb. Only to die and then be reborn at the feet of a statue of the moon god Khonshu known as the Taker of Vengeance. With a renewed, heavenly body, he got revenge and used his merc-made fortune to turn from Marc Spector to the vigilante Moon Knight, AKA the Fist of Khonshu.

Different Personas adopted by him

Luckily,  he has help from friends in his orbit, like a trusted pal and pilot Frenchie and his now lover Marlene Alraune.  But since his resurrection, Spector has adopted numerous personas beyond Moon Knight.

At times he has become Mr. Knight, the suit-clad gent who’s as cool as ice.

Or Jake Lockley, a streetwise cabbie with an ear to the ground to keep tabs on criminals.

He’s even sported personalities based on Spider-Man, Wolverine, and Captain America. And while he uses these identities to help him in his battles, they’ve also caused him pain and hardship, as they have led to disassociative identity disorder.

With any of his many identities, Moon Knight utilizes his years of battle training along with high tech gadgets and vehicles to, honestly, just beat the living hell out of criminals. But Moon Knight’s hero career hasn’t always been that bloody, thank goodness.

He’s been an Avenger, worked alongside Spider-Man, had a young sidekick named Midnight, plus had various other lunar explorations. And fun fact, Moon Knight once quit the Avengers by deleting all their files on him and burning his Avengers ID badge.

Regardless of which Moon Knight you may meet, he shines in the darkest night, and none can eclipse this hero who battles both his own demons and the forces of evil as the Blade of Khonshu.

It has been announced a web series is in works and was going to hit the floors in November 2020. But due to the COVID 19 Pandemic it has been shifted indefinitely.

Just announced at #D23Expo, MOON KNIGHT, an original series from Marvel Studios, only on Disney+ pic.twitter.com/iMHyl7BuAQ

Nothing is official yet, but fans should not expect it before 2022.

We could wax on forever about him, but our time is waning, because now you do know him.

What’s your favorite piece of his gear?

Is it his Mooncopter or the razor-sharp throwing crescents?

Please do tell us in comment and stay tuned to Aware Earth for further updates.