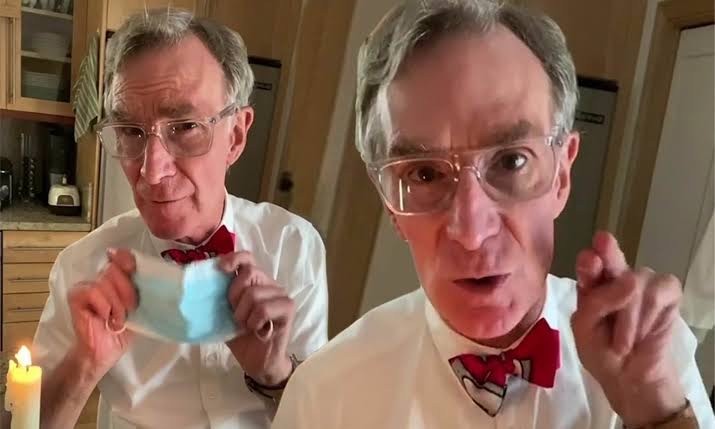 Bill Nye is known for his educational videos. Let’s be honest science can sometimes be boring. But people wouldn’t mind watching them, After adding a Hint of comedy. Well, that’s what “The Science Guy” has been doing for ages. Recently Bill Nye viral Tik tok video is all over Internet. In this video he is explaining the importance of mask.

For More details about this viral video Read Further.

The Science Guy explains the importance of mask :

So in Recently posted Bill Nye is spotted wearing Mask. He explained how we can stop this deadly virus just by wearing a simple mask. Well no one can disagree on this topic. Many health expert and WHO guidelines always emphasised on wearing mask.

In Bill Nye viral Tik tok video he used candles and tried  to blew them, obviously wearing mask. And he was unable to blew candle. This shows that air can’t passes through mask, hence it definitely a necessity to stop this virus spreading chain.

Bill chose a platform like Tik Tok where he has around 7 millions followers. Therefore it is a great platform to reach his targeted audience.

Who is Bill nye apart from The Science Guy

Well, Bill Nye is just another case of an Engineer doing some other job. Bill is a Mechanical engineer by profession. And of course comedian as well. After struggling for so many years he finally got a hit show called Bill Nye the science guy. This was the most watched informative / educational show of 90s.

Since then, we got a New genre science with comedy all thanks to the science guy. For lightning the mood.

Bill Nye is known for his jokes and spontaneous responses so what’s better for him than a chat show. In 2017 he got his very own chat show called “Bill Nye saves the world”. Show is on Netflix.