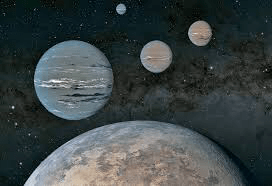 High schoolers Jasmine Wright, 18, and Kartik Pinglé, 16 Aced the Research program when found 4 Exoplanets. These Students discovered Four Exoplanets, as they participated in a Research program called SRMP ( Student Research Mentoring program), Harvard and Smithsonian, the center of Astrophysics. This allows students interested in this field to have on hand experience working with renowned scientists.

This program has paved the way for many students. However, High schoolers that joined this research is a big achievement in itself, and they can say that they have actively taken part in this astrophysics program. But no student Students discovered Four Exoplanets, let alone publishing research papers. Therefore it is really a big achievement for these High school students.

There are many Exoplanets discovered throughout the years, but finding all 4 is such a remarkable victory that to including brightest sun like star and super-Earth planet. Both Students Jasmine wright and Kartik Pinglé have Co-Authored a review paper on their extraordinary discoveries in The Astronomical Journal.

Since Kartik and Jasmine’s planet discovery came to light, this question is trending. So let’s find out how these youngsters have managed to publish research papers at such young age.

They did this wonder in the mentorship of Tansu Daylan, postdoctorate, MIT Kavli Institute. Students researched Data from TESS (Transiting Exoplanet survey satellite), as the name suggests one and only goal of this satellite is to discover new planets.

Kartik explained, If a planet moves around the star, it would eventually cover up the star decreasing the amount of light that happened. And to their surprise, it Was not one but four planets. Orbiting around a brightest star called TOI-1233.

Students discovered Four Exoplanets, which was their and team’s ultimate goal but this discovery has definitely surprised them. And they couldn’t be any happier.

Did you know about this Research program ( SRMP)?  Comment to know more details about such programs in detail. A tell us this story of Students who discovered Four Exoplanets inspired you.