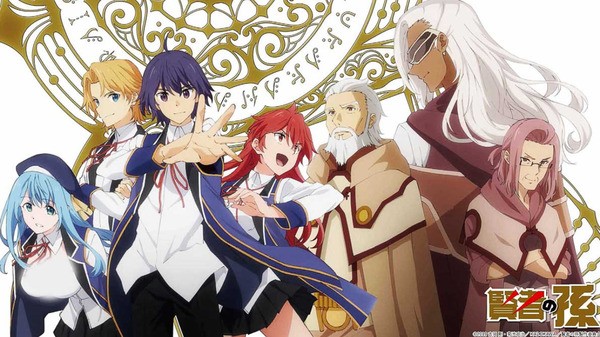 Kenja no Mago : Merlin Walford, a national hero of the kingdom of Earlshade, (voiced by Yuusaku Yara) recedes to the woods with an orphan he saved to have a much calmer environment. The orphan, named Shin, (voiced by Shouhei Komatsu) was a modern-day worker from Japan who was reincarnated into Merlin’s world and as he grows up, he becomes a master in magic casting and martial arts, though poor in social situations. To combat his social awkwardness and lack of both common sense and a sense of responsibility, Shin joins Earlshade’s Magic Academy. Kenja no Mago focuses on Shin’s life in high school at the Magic Academy where he becomes famous, makes friends, learns about the world he lives in, and battle the evil forces that surround him and the city.

Having had the memory of his previous life, Shin grows up to be far more mature than other children his age and seeks everything in the world of magic that seemed different than the life he had lived before. He views magic in a much more sophisticated way than others — using his knowledge of science to manipulate magic in ways that others simply can’t. However, Shin is also quite reckless with his magical abilities since he doesn’t realize how groundbreaking his creations can be.

Will Kenja no Mago have a second season?

The first season of Kenja no Mago ended in June of 2019 making a second season coming soon quite possible. Especially since it has received several positive reviews, the creators may decide to create a new season. However, there hasn’t been an official announcement that there will be a new season.

And, because Kenja no Mago is an adaptation from a novel that already exists named Wise Man’s Grandchild, and as the anime did not cover all of the topics presented in the novels, it seems pretty likely that there should be a second season. Wise Man’s Grandchild’s author, Tsuyoshi Yoshioka is still continuing to release sequels to the novel (with a recent one coming out in July of 2020). However, once again, an official announcement hasn’t been made.

Usually, animes do take quite some time before they announce a second season so hopefully, we can expect a release by the end of 2021 or 2022. Until then, check out Cautious Hero.

Looking forward, season 2 will likely include further plot development around Shin and his experience in the Magic Academy where he continues to grow and master the arts of magic with his peers. It will also likely include a development of the family that Shin comes from and their interpersonal relationships which have only begun in Season 1. We so far know that not only is Merlin Walford famous, but so too is his entire family and is very well-known in the city. This was actually a big surprise for Shin since he grew up largely secluded and wasn’t aware of his family or even what is considered beauty. He is also extremely unaware of how to deal with money or how to go shopping.