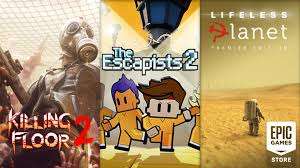 Killing Floor 2, The Escapists 2, and Lifeless Planet are free for this week from Epic

Epic Games, the American giant of video-games has named Killer Floor 2, The Escapist 2, and Lifeless Planet as free games for this week. These games are free till July 16th. Every week Epic Games announces 3 free video games. This week too the players from all over the world are not disappointed!

It is a first person shooter game in which the players have to kill the plethora of zombies. It is a sequel of 2009’s Killing Floor. In this game, the background for the players is the entire Europe. In this game,the player goes on a killing spree killing zeds or zombies that have descended on the continent and have been created by Horzine Corp.

It is a new strategy game in which the players have to get out of the prison which keeps becoming increasingly difficult with every passing minute.

“Risk it all to breakout from the toughest prisons in the world,” reads the official description.”Explore the biggest prisons yet! You’ll have to live by the prison rules, attending roll call, doing prison jobs and following strict routines; all the while engineering your bid for freedom!”

It is played from the perspective of a third person.

“While seeking life on a distant planet, an astronaut discovers an abandoned Russian town. He suspects his mission is a hoax until a mysterious young woman saves him from a strange and deadly phenomenon,” reads the official description.

“After a hard landing on the planet, the astronaut discovers the planet that was reported to be rich with life is instead a barren wasteland. When he goes searching for his crew, he makes a more startling discovery: evidence that humans have already been to this planet years ago!

All the three games are entertaining, having their own dedicated players over the world. However, given a choice I would go for The Escapists 2, as it appeals to my discerning intellect.