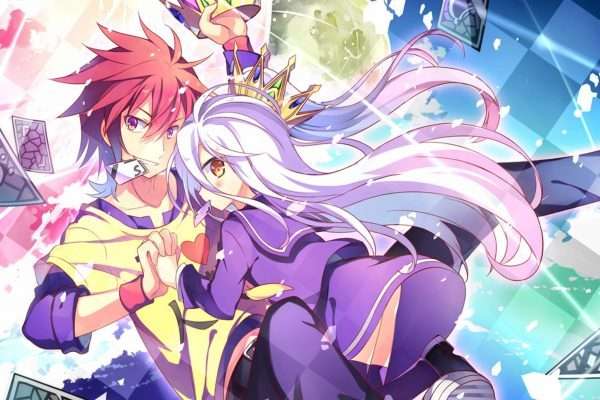 The popular No Game No Life is a rated TV-14 anime/manga adventure series rated 7.8/10 on IMDb. Directed by Atsuko Ishizuka, an inspired Japanese animator, the show’s first season became an instant hit around the world. The show came out in 2014 with twelve episodes, each running about 23-24 minutes. These episodes were based on the first five of the ten light novels.

Not surprisingly, The No Game No Life anime originated with a Japanese light novel series by Yuu Kamiya. The MF Bunko J imprint published and released the novels between April 25, 2012, and January 25, 2018. Next, in 2013, Mashiro Hiiragi, and his wife  adapted the novels to create a manga series for Monthly Comic Alive. Media Factory, who published the manga magazine, released the first issue on June 27, 2006. Finally, later that year, Madhouse’s well-known anime adaptation of No Game No Life launched. It premiered on AT-X in 2014, and outside of Japan on Crunchyroll.

Two organizations found Ishizuka back when she was in art school. While in school she made several animated shorts. Gravitation, featured in a film festival, attracted the attention of both NHK (Japan’s National Broadcasting Organization) and Madhouse.  Ishizuka began her exciting animation career after joining Madhouse in 2004, directing her first show in 2009. She directed three anime TV series after No Game No Life was released. In fact, she was the director of No Game No Life : Zero in 2017, Prince of Stride: Alternative in 2016, and A Place Further Than The Universe in 2018.

Rumors of No Game No Life Season 2 began immediately after Season 1 concluded. However, there are fans waiting six years later. Serious speculation about No Game No Life returning in the latter half of 2019 means there’s hope for Season 2. It is likely that COVID-19 caused delays.

The shows official sites, ngnl.ip/tv (Japanese『ノーゲーム･ノーライフ』アニメ公式サイト) and  madhouse.co.jp, have not given an official announcement about Season Two. To date there is no official trailer. But fans expect the show’s return between 2021-2022.

In 2017, Madhouse spoke of a second season, but allegations against artist Kimiya for plagiarism halted everything. Anime Amino said Kamiya traced poses of another’ work and used them for his characters. The allegations over this popular series, of course, caused surprise and disappointment among its fans.

Since then Kamiya apologized and paid the artists that he based his work on.

On July 15 that same year, the studio created a movie adaption titled No Game No Life : Zero. The film was based on volume six of the light novel series.

The Plot of No Game No Life Season 1

The No Game No Life story’s plot involves two human mastermind gamers, Shiro and Sora. Shiro, the female protagonist, is a prodigy of logic, capable of solving difficult problems. Not surprisingly, she shows little emotion and struggles to understand feelings and behavior. For this, she depends on Sora, her younger step-brother.

Teto, a young boy even though he’s 6,000 years old. He acts like a human child and detests fighting, but claims to be the One True God. Although he is inside a King chess piece, he resembles a deck of cards. Everything in Teto’s strange world of enchanted creatures is determined by a game. He challenges the siblings to a game of online chess, but they win. Having never lost before, Teto brings the siblings to his realm of Disboard and offers to give them his throne if they win his game.

To play, Shiro and Sora must collect the chess pieces from the 16 races of people and unite or conquer them. Shiro and Sora want to overthrow Teto and the sixteen ruling races, even though humans are supposedly the weakest race.

Teto said, “You sixteen races who think yourselves wise, exhaust your reason, knowledge, skills, and wealth to construct a tower of wisdom and prove that you are indeed wise.”

It’s here in Teto’s world where Sora and Shiro’s skills are put to the test. Now their fate, and the fate of all humanity, will be decided by a game.

What’s in a Character’s Name?

No Game No Life has some interesting names, but have you checked out their meanings?

The names Sora空 and Shiro白 together mean blank空白 which is what they call themselves. Their last name means none.

Tet’s name (テト)  is the 9th letter of the Hebrew alphabet (“ט” in Hebrew). It represents the two possibilities of man. It is a letter that means good and evil.

The Flugel (天翼種(フリューゲル) means to flap its wings. The Flugel’s government is led by The Council of 18 Wings.

No Game No Life Season 1 Episodes

FanFare for No Game No Life

Reddit has a subreddit NGNL fanbase of 44.3 members created for the light novel and anime series. Thus, fans of the light novels and anime call it “funny and surprisingly smart”. They love the awkwardness and haughtiness of the main characters. In addition, they loved that the main characters were siblings and playing games to change their lives. Many liked the movie from 2017 even better than the series. Naturally, many assume at this point that the second season won’t happen.

Ten volumes of light novels have been published for this series. Since the season was based on the first half of the written material, and the movie was based on the sixth, there’s still plenty of material to work with for a second season.

Read Also The Boys has been renewed by Amazon prime video for its third season.

The last episode of No Game No Life Season 1 ended with Shiro and Sora facing Teto. Will the siblings defeat Teto and save humanity? Will there be a new challenge facing Shiro and Sora?

With any luck, we will get to see more of the sibling duo!