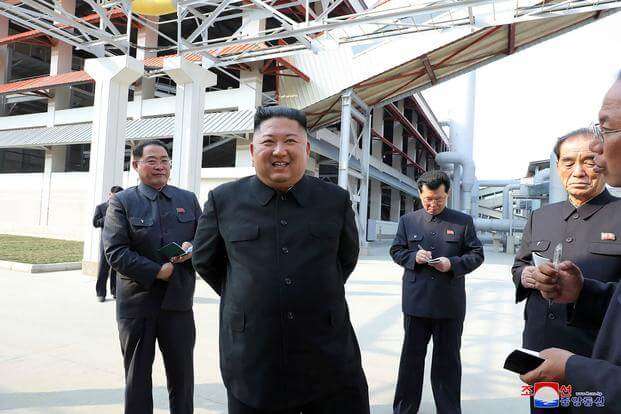 Mysterious absence of the supreme leader

According to reports , Kim jong Un’s public appearance after 3 weeks in a photo released by North Korean media. Has set clues and hints about his mystical absence.

Observation made from photographs

Publicity announcement reports Saturday about Kim Jong Un’s visit to a fertilizer factory in the northeast of Pyongyang. Didn’t make a minor quotation to the worldwide belief about his health in recent. Which left the observers to observe from the photos of the supreme leaders background , entourage and physical appearance.

Who was last seen in state media on the 12th April, speculations about his whereabouts have arrived. Since his unpredictable absence from 15th April to celebrate his grand fathers birthday, state founder Kim II Sung. US officials were told that Kim Jong Un had gone under a cardiovascular procedure. And was in critical condition which dosent seem so in the photographs.
He, who is 36 has not shown any sign of weight loss due to a serious health issue. And was seen wearing a mao suit and seemed to have a fresh haircut.

Kim Yo Jong is the supreme leaders sister who was also found standing close to him in the photographs from Sunchon Phosphatic fertilizer factory visit. This proximity is in the leaders favour , this show Kim Yo Jong world wide discussion of taking over his place has not damaged her standing near her brother. She who is also 30 was seen with make up and a hair band which are new editions , Kim Yo Jong’s new appearance suggests that she is aware of her new profile.

3. No member from Kim Jong Un’s entourage was seen wearing a mask

covid-19 still being a concern in North Korea. JoongAng daily newspaper has reported that the supreme leader had kept himself in self isolation or quarantined due to one of his bodyguards, who was confirmed with the infection.

4. White stick and golf cart in the background

One of the officials can be seen holding a white stick, which was seen to be used as a pointer in a presentation in another photograph. The development of the plant has been closely watched and suspected of having dual use capability that would help the country produce yellow cake uranium for its weapons.

The golf cart in the background

The golf cart visible in the picture, is similar to the one seen when Kim was out of the 6 week absence in October 2014, facing speculation that the leader was battling gout.

Last but not the least, the factory also looks very extensive and anyone would require the cart for a round. a similar vehicle was used for Chinese President Xi Jinping, a tour while his visit last year to Pyongyang.