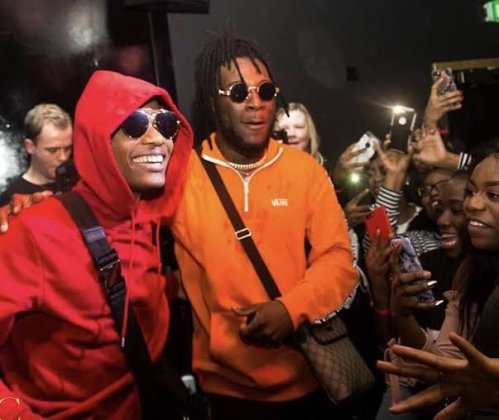 Wizkid and Burna Boy are here to entertain us. Wizkid has unveiled the music video of Wizkid’s ‘Made in Lagos’ project. And fans are already loving it. ‘Made in Lagos’ is Wizkid’s latest collab with Burna Boy. The music video has a direction by Meji Alabi- the same dude who directed Burna boy’s other videos like “Pull up” and “On the Low”.

Wizkid and Burna Boy: The reunion

Nigerian artists Wizkid and Burna last united in 2013. The union was for Burna Boy’s album- L.I.F.E. Now after a really long time, they have collaborated for Wizkid’s new work. So, they dropped the bomb for their fans by releasing new video “Ginger”.

The video and the work is enough for the fans for to go crazy. It features two stars performing in a big and luxury studio. The artists are surrounded by dancing models who also poses for the camera. They also play a game of Oware. Oware is a strategic game of the Mancala group of sport.

Both the stars- Wizkid and Burna boy received a lot of name and fame whenever they worked together on any project. It is for us to see whether they will be able to do the say, this time also. They have seen their name becoming famous in the US as a consequence of their union with other stars and artists. For example, Wizkid received appreciation when he and Drake worked together for “One Dance”. Wale contributed in Wizkid’s album ‘Shine’. Whereas, Burna Boy gained encouragement for coincidental song title mashup. The mixup even resulted in Burna Boy getting a platform to release his ‘African Giant’ album.

Wizkid and Burna Boy maintain the style in the new video. And one lesser-known fact is that ‘Ginger’ has been regarded as one of the best songs of Nigeria in 2020.

Adeline Gray ready to be star of the show after Jordan Burroughs versus David Taylor is postponed
Trevor Noah buys out Bel Air mansion for a whopping 27.5 million US dollars