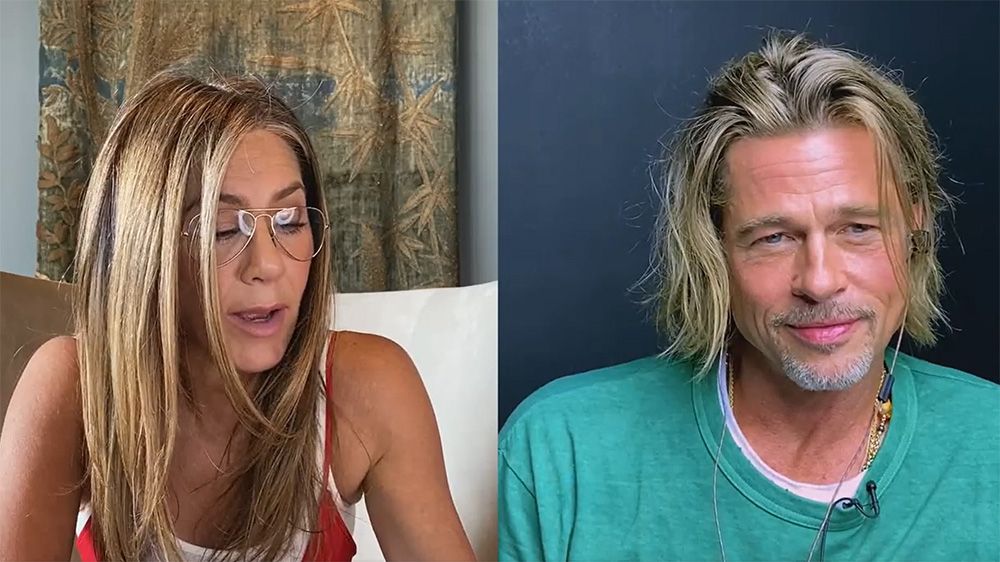 Brad Pitt And Jennifer Aniston reunite after a decade. They come up together in a virtual meet for fundraising meant to help the relief for COVID-19.  Dane Cook hosted the show online and bring back together with the celebrity ex’s Brad Pitt and Jennifer Aniston.

The couple had 5 years of marriage life. They got hitched in the year 2000 and got divorced in 2005. The reason behind the break up of their five years of married life point finger to Brad’s relation with Angelina. The duo never unites for any show since then.

However, the celebrity ex-couple decided to forget the past dispute among them and get a healthy relationship. And before the reunite also they seemed to have a talk Screen Actors Guild Awards earlier this year. Brad Pitt also joined the birthday party of Jennifer Aniston this year.

And now the latest reunite for Dane Cook Presents Feelin’ A-Live: Fast Times at Ridgemont High table read made fans gaga over their easy bonding. They share some hilarious moments together while rejoicing their earlier projects together.

Both of them recreated some moments of them and also host Dane Cook made them read a script where Brad has a sexual fantasy about Linda. The moment was hilarious as hell and the other participants could not stop laughing on their comic sense.

Others Took Part In The Virtual Event

It was a great virtual show indeed and fans got some epic moment where Brad Pitt and Jennifer Aniston reunite again after so long. Apart from the ex-couple, there were other A-lister of Hollywood present there. Henry Golding, Shia LaBeouf, Ray Liotta, Jimmy Kimmel, John Legend were also there among the other stars.

A star-filled event hosted by Dane cook went successful and fans can’t stop gushing over the hilarious moment they shared in the virtual meet.

Christina And Ant. Anstead Split Within 2 Years Of Married Life
Watch Dogs 2 Free: Get It Now In Epic Game
Comment