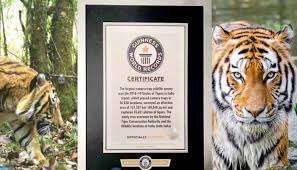 The 2018 Tiger census in India has been recorded in the Guinness Book of World Records for being the largest camera trap (outdoor photographic equipment that starts recording as soon as animal motion is detected) wildlife survey ever.

The fourth edition of the census, which was carried out between 2018-19, was “the most comprehensive to date, in terms of both resource and data amassed,” mentions the Guinness Book of World Record on its website.:2018 tiger census

Terming this achievement a great moment, Union Environment Minister Prakash Javadekar tweeted, “The All India Tiger Estimation is now in the Guinness World Records for being the largest camera trap wildlife survey, a great moment indeed and a shining example of Aatmanirbhar Bharat.”

“Our census of tigers entered Guinness World Records because we have installed more cameras to monitor them as compared to other countries. Their population is nearly 70% of the world’s tiger population,” he told news agency ANI.

Some details regarding this census are:

A positive outcome of the survey was that it concluded that India’s tiger population had increased by roughly one-third – from 2,226 in 2014 to 2,927 in 2018, though the Guinness Team says “some have cautioned that this rise may in part reflect more comprehensive surveying as opposed to purely a population surge in tiger census.

The Royal Bengal Tiger is threatened by factors like poaching and loss of habitat. At one time the population had dwindled to 2226, which has now reached a more encouraging 2927. Tiger is our national animal and should be preserves at every cost. 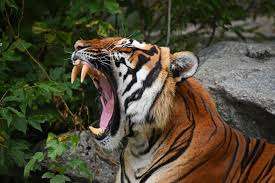 “Tyger Tyger, burning bright”, in the words of William Blake seems to be apt for the situation of tigers at present in India.