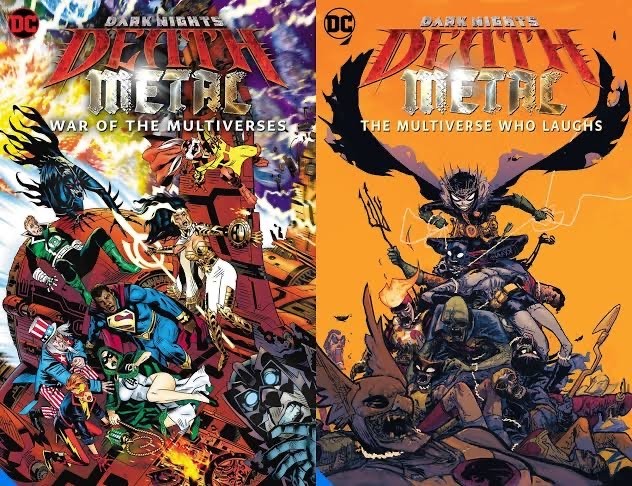 Wonder Woman in Death metal is stronger than ever. She just got a massive upgrade in order to defeat the most powerful Batman ( who laughs).

Let’s get into the details, what is this upgrade all about, how powerful it is, and more trivia on death metal’s seventh issue releasing in January 2021.

All about Wonder Woman’s power upgrade:

This upgrade is all about defeating the darkest knight that the DC universe has ever seen. With the help of her magic lasso, she has turned herself into the most powerful version of herself. And probably she is now the most powerful DC hero of Death metal. She can stand in front of an evil batman in the battle. Wonder Woman dipped her magic lasso into a special forge to become something the world has never seen before.
She is filled with cosmic energy, became of gold. This is the most powerful up-gradation of her.

In the released preview of the 7th edition of the comic, it is seen that superwomen have got some added abilities like seeing past and see everyone who they defeated. However, this superhero is all ready to face this supervillain.

This most anticipated 7th edition will be available to readers on the 5th of January 2021.

All about Wonder woman :

She is one of the most powerful DC Comic characters. Having her magic lasso by her side all ready to fight crime without revealing her identity. But the universe has another plan ready for her as she has to fight with the greatest villains of the era.
Recently, Wonder Woman 1984 premiered on HBO Max and Theatres. Definitely getting a great response.

Death metal is created by Scott Snyder and Greg Capullo. This is seven edition comic hence edition releasing on 5 January will be its last comic of this series. The First edition was released on 16 June 2020. It has millions of readers as it has the most devilish villain and set in a completely different universe.

Goddess Perpetua’s sole intention is to destroy the earth. Just because she can renew everything the way she likes. Her most trusted ally is Batman who laughs. He has an evil army of batmen. Who is just waiting to get Perpetua’s order so they can destroy everything or anything that comes in their way.

Originally Death metal since its first edition has 7 protagonists including Wonder Woman, Batman, superman, super-boy- prime. However, Wonder Woman in death metal will be the last one to stand against Batman who laughs.

He is the evilest antagonist you will ever see in DC Comic. He has all opposite characteristics to Batman our beloved superhero. But he is a bit more powerful.

Helping goddess Perpetua in her evil intentions destroying the universe and taking many innocent lives. He is not stopping any sooner.

Are you excited to read this edition of Dark night: Death metal with upgraded Wonder Woman?

Ryan Phillippe took his son for alien- hunting on his birthday.
Roblox Hack APK Unlimited Money + No Ads and Much More Download Now